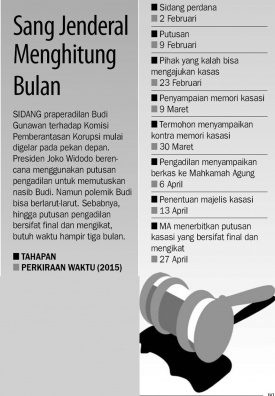 The meeting between President Joko Widodo (Jokowi) and Gerindras General Chairman Prabowo Subianto on Thursday showed that the country was secure and the political situation was stable, Vice President M. Jusuf Kalla stated.

"It showed that our political condition is stable, and the political parties are friendly to each other. The situation is good," he informed newsmen at his office here on Friday.

He said no deal was made during the meeting between President Jokowi and his former presidential election rival Prabowo Subianto, but the two agreed that they have to build the country together.

"It is true that the country must be built together. No certain deals were made by the two," he noted.

Prabowo, who is also the leader of the Red-and-White Coalition of opposition parties, met President Jokowi at the state palace in Bogor, West Java, to report the achievement that had been made by the countrys martial arts players during the world competition.

Prabowo Subianto is also the president of the World Martial Arts Federation.

He said after the meeting that besides martial arts, he had also discussed national issues with the president.

"We also touched on his commitment to strengthen and preserve state institutions, and I support him. The Corruption Eradication Commission (KPK) and the police must both become strong, and we will maintain it," he emphasized.

Regarding the current issue of inauguration of Commissioner General Budi Gunawan as the new national police chief, Prabowo stated that it was the prerogative of the president, and he will respect whatever the president will decide later.

President Jokowi decided to postpone the inauguration of Commissioner General Budi Gunawan after the KPK named Gunawan a suspect in an alleged corruption case, although the parliament had agreed to his appointment.

Following Gunawans naming as suspect, the police named KPK Deputy Chairman Bambang Widjojanto a suspect over allegations of asking a witness to give a false testimony at a court over a regional election dispute case in 2010 to ensure a win for his client while he was still a lawyer.

The issue has caused tensions in the relations between the two institutions.